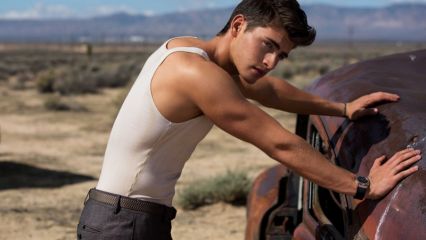 Gregg Sulkin will play high school quarterback who pretends to be gay in new comedy, “Status Update”
His first major gig since "Faking It"!

English actor Gregg Sulkin will reportedly play a high school quarterback who pretends to be gay in the upcoming indie comedy film Status Update, his first major gig since starring on MTV’s Faking It.

Sulkin will play a talented high school quarterback who aspires to be a journalist. With an article in mind, he embarks on a social experiment that sees him change his Facebook status from “single” to “interested in men” so he write about how perceptions of him change from his family, teammates and teachers.

However, he gets more than he bargained for when a fellow student with a crush on him posts a tribute video about his hero — “the gay quarterback” — which subsequently goes viral, thrusting Sulkin’s character into the national media spotlight and making him a hero to gay teens across the country. His relationships are put to the test as he tries to keep the big secret that he’s actually straight.

— so here’s hoping he gets bitten by the nude bug again and gives us something a little more work-unfriendly in this new film!

An official premiere date for Status Update hasn’t been announced yet.