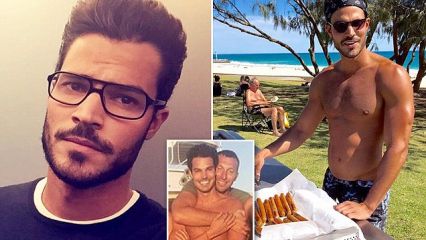 Model Ryan Channing vaguely talks about his new relationship with five-time Olympic gold medalist Ian Thorpe in a new interview with GuysLikeU, and discusses his goals for the future — things like puppies, children, and family, but “not particularly in that order,” he jokes.

“I’ve started preparing for my future career,” said the 32-year-old law student. Though it’s unclear how the couple originally met, they’ve been hanging out a lot together in Sydney while Ryan finishes up school.

“I’m currently working in chambers where I have the good fortune of been able to work with a group of very talented barristers that I hope will inspire me during my studies at law school. After that, my focus will be towards puppies, children and family (not particularly in that order) ha!”

Asked specifically about his relationship with Thorpe, which the two have kept low-key and away from the media, Ryan said, “From what I’ve seen, everything that has been reported is positive!”

The two aren’t necessarily rushing into marriage though, especially since same-sex marriage is still not legal in Australia.

He dodges a question about marriage altogether, and instead, talks about the state of Australia’s marriage equality movement.

“Australia is expecting to have a plebiscite (public vote) on the issue this year. I’m not so sure about this approach as I’m concerned about the possibility of seeing the anti-same sex marriage advertisements as it could cause some people to take a step back,” he said. “While the majority of Australians support marriage equality there is a vocal minority voice that would like to maintain the status quo. It’s important to make sure that its gets easier for LGBTI in future generations, not harder.”