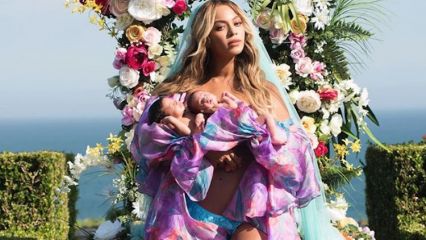 After months of silence and speculation that Beyoncé gave birth to her twins, the singer finally revealed today Sir Carter and Rumi in a glorious high fashion editorial, no less.

With the ocean in the background, Bey stands in front of some hedges and an angelic floral arrangement that complements the billowing look she's wearing created by Palomo Spain. Launched in 2015 by queer designer Alejandro Gómez Palomo, the London College of Fashion alumnus has built a significant following for his femme, fanciful menswear. "It’s the only piece I’ve ever made like that," Palomo told The Fashion Law. "It is vintage silk organza from a really old couture textile shop in Córdoba, Spain, which is near where I live. It is circa either the 1950s or the 1960s. I thought, Oh my God, I am so in love with this fabric. It had a midcentury quality-but we changed that. It’s exquisite... and I can never find it again, of course."

As Hari Nef points out, Bey's decision to wear Palomo Spain is significant, not only because he's a queer designer, but because she's "technically wearing menswear for the reveal of her twins-whose pregnancy she framed with so much feminine spirituality." She continues, "The idea of Bey wearing something intended for/shown on effeminate fancy queer-presenting men makes me so happy."

Show your partner some love with Gay Valentine's Day cards for the most romantic holiday of the year.

Gay Ibiza is one of the top four gay destinations in Europe, alongside Gran Canaria, Mykonos and Sitges.

Sexy Men's underwear is a must!

If you’re planning any upcoming summer travels, now is the time to shop for that sexy underwear or that cute swimsuit! The underwear you pack for your trip(s) is as important as anything else in your bag.