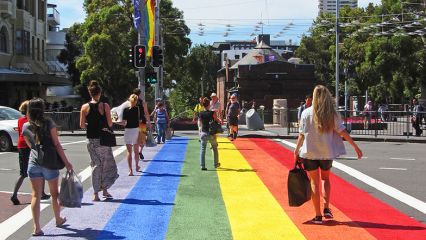 The country will take part in a postal vote on the issue next month, and while it won’t be binding, it will give politicians a better idea of what the public wants when they perform a vote in parliament.

Conducted by Newspoll for The Australian, a major new poll has found that 63% of Australians will be voting in favour of same-sex marriage, while 30% will be voting against, and 7% are still undecided. A similar poll conducted last year found that 62% would vote in favour, 32% would vote against, and 6% were undecided. As expected, younger voters said they were more likely to vote in favour of marriage equality, with 70% of 18-34 year olds intending to vote yes, compared to 49% of those aged 65 and over. The decision to hold a postal vote came after plans for a national plebiscite were blocked by the Senate last year. Last year, Kylie Minogue and her ex-fiance Joshua Sasse famously stated that they wouldn’t tie the knot until same-sex couples could do the same, and introduced the highly-publicised Say ‘I Do’ Down Under campaign.

Their campaign was backed by a number of celebrities including Natalie Imbruglia, Margot Robbie, Jake Shears and even Dolly Parton. Celebrities aren’t the only ones to show support for equality in Australia, as Ben & Jerry’s recently banned customers from buying two scoops of the same flavour until same-sex couples can marry. But not everyone is in favour of marriage equality, as Tasmanian Senator Eric Abetz has claimed that allowing same-sex couples to get married will lead to people marrying inanimate objects like the Harbour Bridge. “Once you remove that vital element of it being a man/woman thing, and you just say love is love etc., then basically you open the floodgates to anything,” he said.