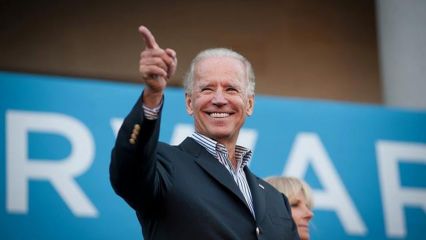 Joe Biden says now is not the time for the LGBTI community to give up hope or its fighting spirit. Hold Trump accountable on friendship pledge!

‘Just because you don’t have Barack and me in the White House doesn’t mean it’s time to give up, keep quiet, stay on the sidelines,’ the former US Vice President said this week in New York at a gala hosted by the Democratic National Committee. The Associated Press also reports Biden as saying: ‘The first thing you should do, even though he won’t respond, is hold President Trump accountable for his pledge to be your friend. ‘Demonstrate that public opinion and history are on our side!’ During his campaign last year, Trump had promised to be a friend to the LGBTI community.

But since taking office, he has appointed several cabinet members with anti-LGBTI views and his administration rescinded federal guidelines put in place to help protect transgender students in school. Biden blasted anti-transgender laws in such states as North Carolina, Texas and Mississippi that are ‘targeting young people, kids who are just trying to attend school.’ ‘Transgender Americans are under attack from state legislatures from North Carolina to Texas,’ Biden said. Despite it all, Biden remains optimistic. ‘One of the reasons, in spite of this terrible period we’re going through, I’m confident we’ll prevail is because most change occurs culturally before it occurs governmentally,’ he said. ‘The country is way ahead, way ahead of political leadership.’