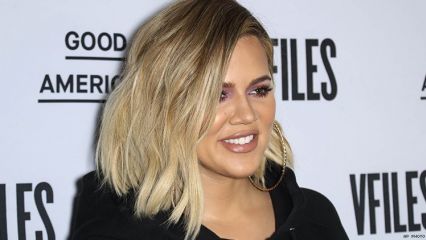 If you haven't been paying attention, it involves '90s model and heartthrob, Tyson Beckford. He commented on an Insta photo of Kim Kardashian West with a particularly body shamey response, which is totally unacceptable. "Sorry, I don’t care for it personally," he wrote in one comment before adding, "She is not real, doctor fucked up on her right hip" with a nauseous emoji.

But Kardashian's response seemed to hit below the belt as well. Many have even gone as far to call it veiled homophobia. "Sis we know why you don't care for it," she wrote with a Kermit sipping tea emoji.

The mini feud seemed to culminate in a respectful post from Beckford, both clarifying his heterosexuality and showing support to the LGBTQ community. "Train 5-6 days a wk, weights martial arts and firearms and I defend those who can’t defend themselves! I support LGBTQ, even though I’m not gay. It’s just the human thing to do," he wrote in the caption.

Now Khloé Kardashian is throwing her two cents into the ring. In an interview with Extra, she defended Kim against those calling her homophobic.

"I don’t know if people are saying that about him," Khloé said. "But I just know people are attacking Kim about being homophobic. I'm like she's anything but, so that’s ridiculous."

Although Kim's recent budding friendship with Donald Trump leaves her stance on homosexuality a little murky, it's certainly possible her comment was misconstrued. But Khloé also went on to add that body shaming isn't cool either.

"I was with her when that was going on," she said. "What I hate is that people are saying that she's homophobic for that, but no one is saying that we shouldn’t also body shame women."

While we have attempted to cover both sides of this issue, there's no denying that women face an unfortunate dynamic of body standards and misogyny in our culture. Now, can we please move on to the next pointless celebrity feud?